There's not much I can say about this day that hasn't been said before.  Being the granddaughter of Holocaust survivors, I often find myself thinking about how much the world has changed since the Holocaust and yet, how much has stayed exactly the same.
I visited Poland last June with my family on a roots trip to find out more about my grandparents' lives before they came to Canada in 1948.  Somehow while my grandparents were still alive, visiting the place that had all but destroyed them and their families didn't seem all that important, but after they died, I felt a deep need to stand on the very ground where they endured the horrors of the Holocaust.  I also wanted to see where they lived, where their synagogues stood, where their dead were buried and where their communities thrived before the Nazis obliterated them.  I began by doing some research on my own using the online archives at Yad Vashem.  I had begun putting together a rough and incomplete time-line with a few sporadic dates of births - and deaths at Auschwitz - of my grandfather's siblings and was still coming up short when my father suprised me with the offer of a trip to Poland.  I jumped at the chance.
Excited and nervous at the same time, I had no idea what to expect.  I began to expect the unexpected.  For those of you who have visited Poland and some of the concentration camps, you know what I mean.  I think the hardest thing for me at the beginning was just being amongst all these Poles.  I couldn't stop thinking and wondering what their parents or grandparents were doing during those terrible years.  I would walk by someone and ask myself, did his grandfather turn his Jewish neighbor in to the Nazis or did he offer to help?  It got to the point that I had to stop otherwise it was all I would think about.
But I was surprised at how beautiful Poland is.  It's endlessly green and the architecture in the older city center of Krakow is magnificent.  The larger cities we visited, like Krakow and Warsaw were surprisingly modern and urban and didn't at all jive with the horse-and-buggy, black-and-white backwater village that I had envisioned.  It was at odds with what I had expected.
But the concentration camps cured that for me.  They were mind blowingly massive, bone-chilling, and horrific.  There were barracks that I couldn't bring myself to enter, and I lingered outside with others who couldn't bear to step in either.  What kept coming back to me was how after all the Holocaust awareness school programs, and countless museums and monuments, that there is still such a palpable hatred of Jews.  It's hard to believe that people could walk through the gates of Birkenau, see the ovens where the Jews were burned and the showers where they were gassed, read about the rise of the Third Reich and Nazi Germany and their bloodthirsty quest for ruling the world while simultaneously ridding it of an entire race and walk away still feeling hatred for our people.
But unfortunately history has this nasty habit of repeating itself and anti-semitism is rapidly rearing it's ugly head yet again. There are more and more news stories on Neo-Nazi groups on the rise cowardly standing behind freedom of speech laws in order to march in hatred against the Jewish people. It's a hell of a wake up call if there ever was one and for those of you who wave your hands in disbelief that the Holocaust could ever happen again, you're burying your heads in the sand.
This Yom Hashoah is a different one for me - it's the first after my unforgettable trip to Poland.  I've seen Majdanek and Auschwitz firsthand, and it's no longer some black and white picture in a dusty history book.  It's real.  And the endless rows of concrete toilets that ran the length of a long barrack in Birkenau is an image that will stay with me forever.  Participating in my community's Yom Hashoah program tonight just reiterated the decision that my husband and I made long ago to make Aliyah as one of the best decisions we have made for our family.
I've made Israel my home for the last 19 years.  I've traveled back to Canada many times to visit family and have vacationed in Europe during the summers and while I've enjoyed those visits, I'm always grateful the minute the wheels of the plane touch ground at Ben Gurion.  But I have never felt the rightness of living here and the unwavering sense of returning to my true home as I did when I returned from Poland.  Despite being a democratic oasis surrounded by radical and fundamentalist Islam, Israel is still the safest place for a Jew to be. 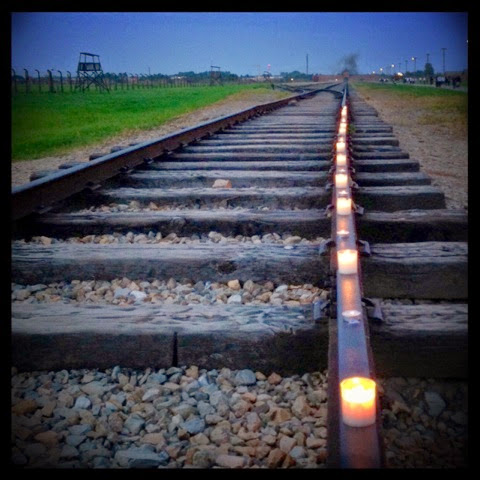 Chavi
I'm a mother of four, a piano teacher and an artist living in Israel. I made Aliyah with my husband and infant daughter in 1995. That same baby is now currently serving in the IDF. I love books, baking and researching family history. I started this blog as a way to document my roots trip to Poland. I mostly write about life in Israel from an Anglo perspective and whatever else comes to mind...